Uniting the forces of goodness for global peace and sustainability

Promoting the Culture of Peace with Love and Conscience 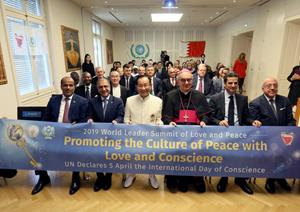 Dr. Hong, Tao-Tze, president of FOWPAL, first row, third from left, ambassadors to the UN (Vienna), and other visionaries celebrate the United Nations’ designation of April 5 as the International Day of Conscience in Vienna, Austria on Oct. 10, 2019. (AP Images)

LOS ANGELES, April 26, 2022 (GLOBE NEWSWIRE) — While the COVID-19 pandemic continues to rage across the planet, a war between Russia and Ukraine has erupted. April 5, 2022 marked the third UN-designated International Day of Conscience, and the Federation of World Peace and Love (FOWPAL) has declared the entire month of April as International Month of Conscience and has been organizing a series of forums and online activities with various organizations around the world in the hope of awakening the conscience in global citizens and uniting them to apply their conscience and do more good deeds to save the world in crisis and move it towards sustainable development. FOWPAL invites people around the globe to endorse the “Declarations for Human Rights of World Citizens and Peace” and two declarations of conscience—the “Declaration of International Day of Conscience” and “Declaration for the Movement of An Era of Conscience”—in order to inject powerful positive energy into the Earth to help stabilize the world.

Peace is everyone’s holy wish. When the light of goodness is illuminated in everyone’s heart, the positive energy of conscience spreads and connects global citizens, forging a tremendous force for action to change the world for the better and make global sustainability possible. For over two decades, Dr. Hong, Tao-Tze, president of FOWPAL, has led delegates from FOWPAL, the ECOSOC-accredited NGO Association of World Citizens (AWC), and Tai Ji Men Qigong Academy (Tai Ji Men) to visit 101 countries on six continents, advocating the idea of love and peace around the world and promoting the culture of peace with love and conscience. They have been recognized as “International Ambassadors of Peace and Goodwill.” Kiribati’s Ambassador to the UN Teburoro Tito, who is also a former president of Kiribati, praised Dr. Hong as “modern-day Confucius.” Dr. Hong led the delegates to travel the world, and they have volunteered their time and self-funded these trips to foster peace and positivity, building friendships with people in numerous countries, touching the hearts of countless individuals, and adding chapter after chapter of heartwarming true stories to their own lives and the lives of others.

In 2018, in front of the Clock Tower of the medieval citadel in Sighișoara, a UNESCO World Heritage Site in Romania, delegates from the three organizations sang the “Love and Peace Song” to give hope and encouragement to global citizens while conveying their selfless love for the world. Those who heard them singing were touched, and many were moved to tears and embraced the delegates warmly.

“When you started singing, it gave me goosebumps,” said Sandra Barbulescu, an English language teacher in Romania, “I’ve always wanted to give the idea of love and peace and unity and love, mostly. So when I saw you doing this, and so many people from far away . . . I understand that you are volunteers, so it really really impressed me. And you have so beautiful voices.” With tears in her eyes, she added, “They were tears of joy. You really touched my heart. Thank you for coming here.”

On a beautiful evening in the summer of 2005, delegates from the three organizations gave a cultural performance at the square in front of the Basilica dei Santi Bonifacio ed Alessio in Rome, Italy, transcending language and cultural barriers and allowing the sisters there, who had not danced in many years, to relax and dance to the beautiful music presented by the delegation. Daniela Sabatini, an Italian composer, spoke of the sisters’ feedback about the event: “I am deeply touched of this. They told me that for many many years, they don’t dance. This evening, they are very happy like children.” Sabatini described the song as “music from heaven” making everyone in the audience feel as if they were “in the sky near God.”

In August 2016, delegates from the three organizations presented cultural performances in the 52nd International Folklore Festival of Gulpilhares in Vila Nova de Gaia, Portugal, with over 2,000 people in attendance. Delfim Manuel de Sousa, director of cultural affairs of Vila Nova de Gaia, said that his heart was filled with love and caring after the delegation’s journey of peace to his city. He stated that he wished to give each member of the group a bear hug because they are more than just friends to him.

In 2005, during the “World Summit of Love and Peace” hosted by FOWPAL in New York, Dr. Hong, Tao-Tze declared September 15 as the International Love and Peace Day. The then President of the Dominican Republic Leonel Fernández attended the summit and was the first head of state to sign the declaration. He and Dr. Hong jointly turned the “Key to the World,” symbolizing the activation of more energy of love and peace in the world. On that occasion, President Fernández rang the “Bell of World Peace and Love,” made a wish for peace, and said, “For me, it’s been a great experience.” “What you are projecting, what you are disseminating around the world is really what the world needs. So instead of violence, instead of hatred, instead of exclusion, I think we should embrace each other as brothers and sisters,” he added.

In 2008, when Colombia, Ecuador, and Venezuela were on the brink of war, President Fernández took the initiative to mediate a peace agreement among the three countries, successfully defusing a potential war, saving millions of people from the scourge of war, fulfilling his wish for peace when ringing the Bell.

In 2002, FOWPAL was invited to visit various countries in West Africa. The then President of Senegal Abdoulaye Wade rang the “Bell of World Peace and Love,” stating that “Senegal, its people, its government and president launch a call to all women and men of the world to build and consolidate peace in the world.” In 2008, President Wade also turned the wish he made when ringing the Bell into actions by calling for unity and peace in the African region. In March 2008, President Wade coordinated and successfully promoted the signing of a peace agreement between the heads of state of Sudan and Chad, ending a five-year war between the two neighboring countries and saving countless lives. The efforts of these presidents to prevent wars have been widely lauded.

Over the years, Dr. Hong, Tao-Tze has led FOWPAL, AWC, and Tai Ji Men to promote a culture of peace with love and conscience around the world. The three organizations initiated the movement of An Era of Conscience in 2014. They also launched a global endorsement campaign for the Declaration for the Movement of An Era of Conscience; to date, people in 195 nations have endorsed it.

As Dr. Hong, Tao-Tze stated in his message for the third International Day of Conscience, “Currently, the world situation is precarious, with the pandemic, war, and many unforeseeable natural and man-made disasters claiming countless lives and destroying homes, plunging the whole world into fear and anxiety.” “The key to crisis resolution lies in conscience,” Dr. Hong remarked, adding that only by awakening everyone’s conscience and encouraging them to act in accordance with their conscience will we be able to stop war, end the pandemic, heal the wounds of the Earth and all living things, and lead the world toward peace.

The world was originally very beautiful; however, due to the increasingly advanced technology, there has been an imbalance in people’s hearts and disorder in the world, causing innocent and good hearts to gradually change. While previous problems have yet to be resolved, new ones are emerging, and now we must work together and take action for peace together immediately. FOWPAL invites everyone to endorse the aforementioned declarations to build a new culture of peace around the world, hoping that the butterfly effect of goodness will continue to expand globally, and that everyone will return to a peaceful world where there is no pain, no fear, no war, and no suffering.

About the Federation of World Peace and Love (FOWPAL): Established in 2000 in the United States by Dr. Hong, Tao-Tze, FOWPAL is an international love and peace organization, with members from around the world. Guided by the principle of “Changing the world for the better starting with one good thought,” it aims to promote world peace and love through various activities such as world summits of love and peace, ceremonies of ringing the “Bell of World Peace and Love,” and cultural exchange performances. To date, 399 prominent figures from 122 countries have rung the Bell, made their wishes for love and peace, and pledged to work for the world’s sustainable future. Among them are 43 heads of state and government, seven Nobel Peace Prize laureates, UN ambassadors, and other visionary leaders.

A photo accompanying this announcement is available at https://www.globenewswire.com/NewsRoom/AttachmentNg/d498e29f-17df-4f8c-b368-7e1a38f14107

The photo is also available at Newscom, www.newscom.com, and via AP PhotoExpress.